In 1920, the 19th Amendment was added to the U. S. Constitution giving women the right to vote.

The women’s suffrage movement for enfranchisement had started seventy years earlier and progressed through several alliances and organizations. During the Civil War, the movement was temporarily set aside as women devoted their energies to the war effort. They resumed their cause in the 1870s and 1880s.

In 1909, the striking women’s trade union league of 20,000 joined the suffragettes. In 1910, the suffragettes organized a large parade in New York City. The Presidential candidates of 1912, Taft and Wilson, supported the movement. The suffragette movement was directed both at the Federal and the State level and fared better in western states: in statewide votes in both Arizona and Oregon in 1912, women won the right to vote, and in 1914, Montana followed and then two years later, Montana elected the first woman to the United States Congress, Jeannette Rankin. In 1917, New York State granted women the right to vote, significantly pushing the movement forward.

On January 12, 1915, a suffrage bill was brought before the House of Representatives but was defeated by a vote of 204 to 174. Another bill was brought before the House in early 1918, where it won by the required two-thirds majority, with only one vote to spare. The vote was then carried into the Senate where it fell two votes short of passage. In February 1919, it was carried again to the Senate, voted upon and lost by only one vote.

The suffragettes were arrested for picketing outside the White House in 1917. While in prison, they went on a hunger strike and were force-fed by their jailers.

These heroines persistently demanded an equal voice, knowing that enfranchisement would also give them other rights. Their unrelenting efforts led to the birth of “feminism;” and so the struggle continues today. 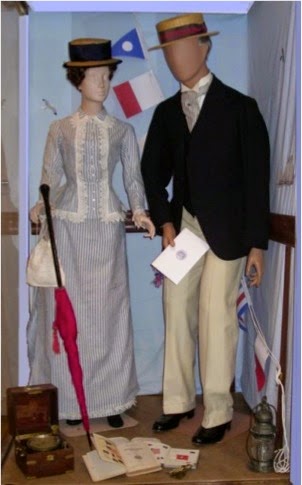 During the 1880s and 1890s, Yacht Club Regattas were very popular. Club members would watch the races from luxuriously fitted steam yachts. There were also many spectators on public excursion and ferry boats.

The famous schooner, America, first crossed the Atlantic in 1851 to challenge British sailing yachts off Cowes, England and won! This marked the beginning of a 132-year proud history of the America's Cup Challenge Races during which time the United States was undefeated.